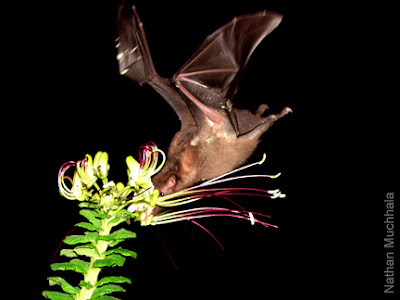 I see you!
Geoffroy's tailless bat (Anoura Geoffroyi) - photo by Nathan Muchhala
Ever since coming across this word, I can't stop saying it: chiropterophily. Chiropterophily, or pollination of plants by bats, is very common in the tropics. Hundreds of tropical plant species are exclusively or at least partly pollinated by nectar-feeding bats.

Many tropical flowers are night-blooming, specializing in attracting bats. Bat-flowers are typically white, cream, or pale green in color, making them easier to see in the dark. They usually have a musky, fermented odor - like that of the bat - or sometimes a fruity odor. They have a large, sturdy, open shape with long, bushy anthers so that the bat's head and chest get coated in pollen when it visits. In return for the bat pollinating the flower, the flower provides the nectar that these high-energy flying mammals need.* 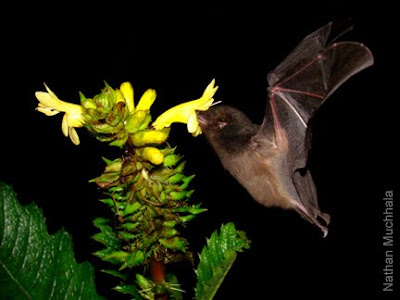 Tube-lipped nectar bat (Anoura fistulata) - photo by Nathan Muchhala
Nectivorous bats have both good eyesight and a keen sense of smell, which helps them locate the flowers. They also have evolved adaptations to the flowers, including long muzzles, less teeth, long bristly tongues, and the ability to hover - all of which help them get to the nectar. 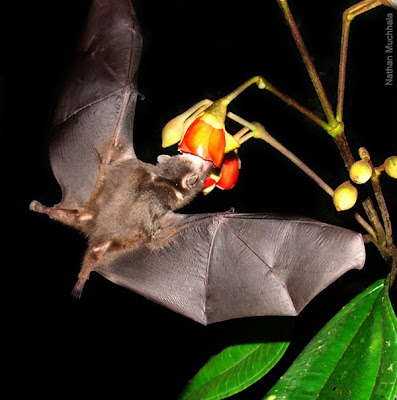 Geoffroy's tailless bat - photo by Nathan Muchhala
The bats also ingest the pollen of the flowers, which is higher in protein than the pollen of flowers not pollinated by bats. It contains two amino acids that are useless to the plant but useful to the bat - for making the connective tissue of its wings and tail membrane and for producing milk. 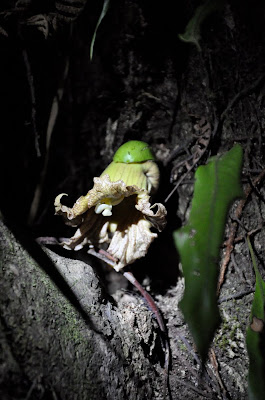 calabash flower, Bosque del Cabo, Costa Rica
In addition to the colors, smells, and flower structures a plant evolves to entice bats, the position of the flowers on the plant are also bat-friendly. For example, the flowers of the calabash tree (see above) grow on the tree's trunk - this is known as cauliflory. The mucuna and the sausage tree have flowers that hang from whiplike branches, which is known as flagelliflory. Flowers that are penduliflory hang down as streamers. And finally there are the brush-type flowers, like that of the agave (see below) and baobab. In all of these cases, the flowers are positioned in a way that allows the bat easy access. 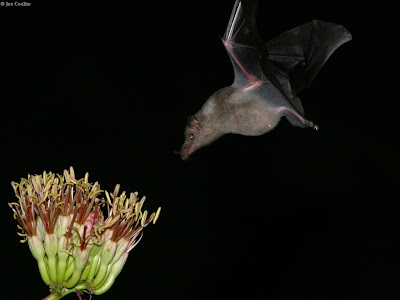 Mexican long-tongued bat (Choeronycteris mexicana) - photo by Joe Coelho
While more common in the tropics and subtropics, Chiropterophily also occurs in the southwestern United States and Mexico, where bats pollinate the night-blooming cacti of the deserts, including the saguaro cactus, the organpipe cactus, and the agave. In this set of photos a Mexican long-tongued bat (Choeronycteris mexicana) is pollinating an agave. (Looks like he's had his fill of nectar - has a bit of a pot belly in the photo above!) 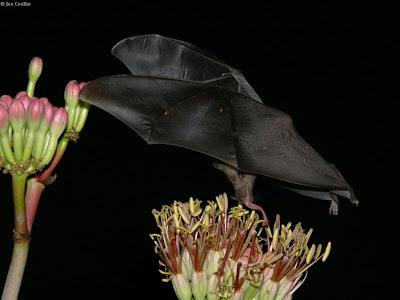 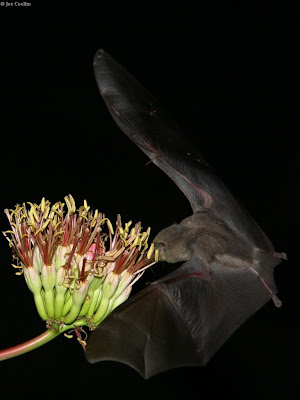 photo by Joe Coelho
*Nectar-feeding bats have an incredibly fast metabolism - faster than any other bird or mammal on earth! So if they don't find nectar every day, they will starve. Glossophaga soricina, a small nectivorous bat in Central and South America, can consume 150% of its body weight in one flower visit! Read more (and see a funny picture of this bat covered in pollen) in "Nectar-feeding Bats Live on Energetic Knife Edge" (Cosmos).
related links:
"Animal Pollination in the Tropics: Hummingbirds to Hawkmoths" (my post)
"Bat Pollination" (wikipedia)
"Bats and Their Flowers" by Arthur C. Gibson, UCLA