The Osa Wildlife Sanctuary, also known as Fundación Santuario Silvestre de Osa, rescues, rehabilitates, and releases orphaned, injured, and displaced wildlife in Costa Rica's southern zone. Carlos explained to us that we could not bring in any food or drink and we had to remove all jewelry, anything that the animals could pull off, even sunglasses - not sure about regular eyeglasses; I'm glad I put in my contact lenses. The monkeys liked shiny objects and were not shy about helping themselves to them, as some previous tourists had unfortunately discovered. You can bring cameras in, of course, just be careful with them. (Also, children under 10 years of age are not allowed.)

Once we stepped off the boat and waded through some water to get to the shore, it was quite muggy and buggy. We met the owner and later his wife. And we met the animals... 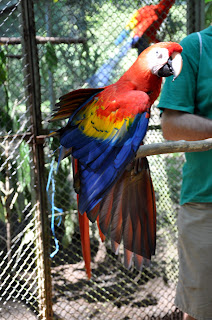 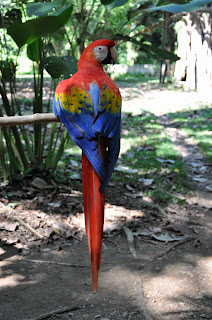 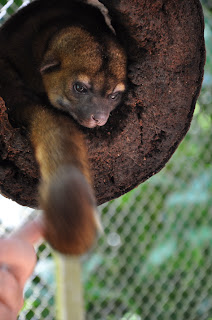 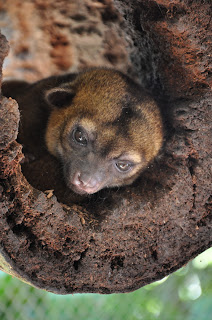 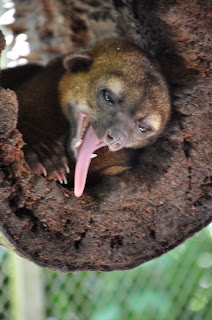 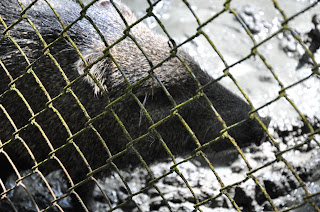 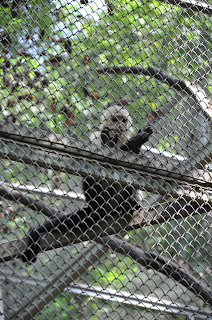 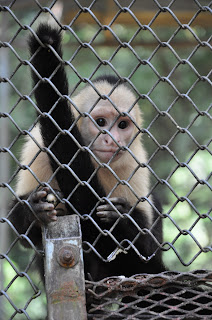 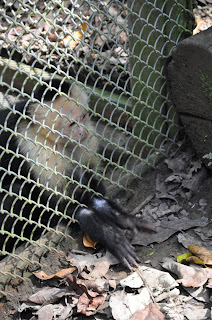 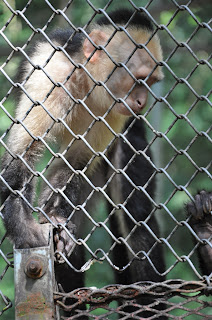 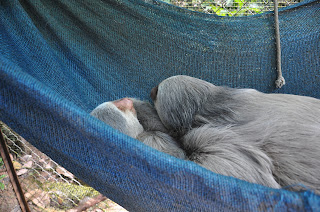 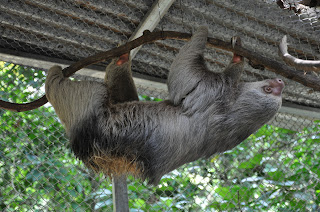 watching the sloth move looks a lot like this still photograph actually! 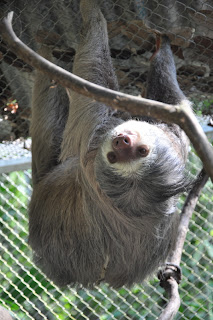 quite photogenic
The sloth is a rather interesting creature. Its fur is an ecosystem unto itself! It hosts many non-parasitic insects due to the bacteria that grows on it. The bacteria, in turn, serves as a camouflage for this slow-moving arboreal dweller. Another interesting thing about the sloth's fur is that it grows away from the extremities. (In most mammals the fur grows toward the extremities.) This is to provide protection from the elements while the sloth hangs upside-down, which is how it spends most of its time!

The sloth is well-known for its excruciatingly slow movement. (There are two-toed sloths and three-toed sloths, though in fact both have three toes. Two-toed and three-toed actually refers to the number of fingers. ) When in danger, a three-toed sloth (the slower-moving of the two) clocks in at about 13 feet per minute in the trees. On the ground, its maximum speed is 6.5 feet per minute. This kind of movement burns lots of energy. (Oddly enough, the sloth is a competent swimmer - see link to video below.) It maintains an extremely low metabolism and low body temperature in order to conserve the little energy that it receives from its diet of predominantly un-nutritious leaves.

The sloth's claws are adapted to holding onto a tree without exerting any effort on his part. This is a deterrent for its human predators, as it can be shot but will not fall down because its claws are still maintaining its grip of the tree! It is these extremely long and sharp claws that give it its only natural defense. One would think that the sloth would suffer from heavy predation because of its slow disposition, but that's actually not the case. Its bacteria-laden fur enables it to blend in with the trees and its slow movements usually go unnoticed by predators. Virtually the only time it becomes vulnerable is when it comes down to the ground for its approximately weekly, ahem, office work. The sloth will dig a hole - always in the same spot - urinate, defecate, then cover the hole. It is quite a curious thing that a sloth would go to these great, risky lengths when it is so vulnerable on the ground. I remember reading in Tropical Nature that this behavior may be due to the fact that a sloth will usually occupy just one tree (usually a Cecropia), and by doing its business near the base of its tree, it fertilizes the tree that, in turn, provides it with food. 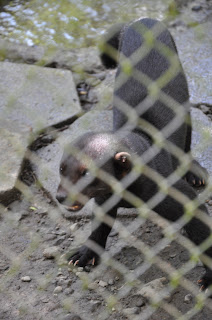 tayra - a type of weasel
And now for a special treat... A baby anteater! 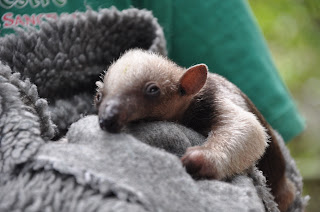 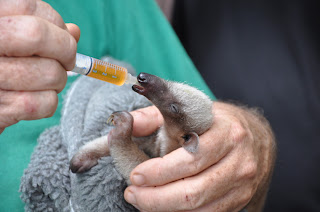 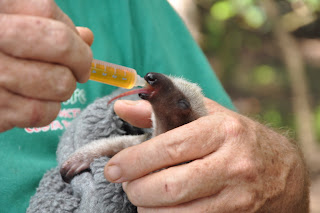 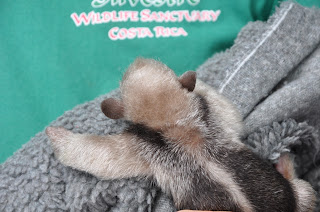 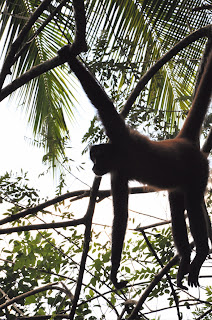 one of the free-roaming resident spider monkeys 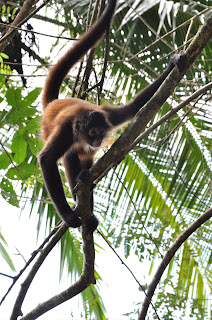 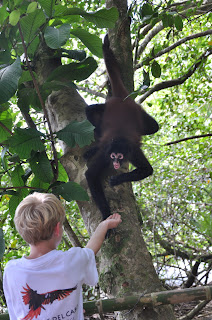 we got to feed her 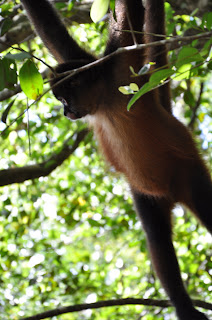 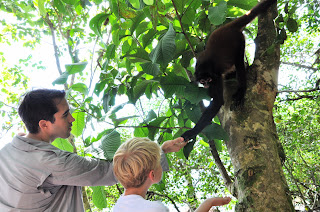 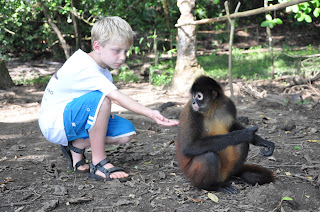 When we got back on the boat, we ate our sack lunches, that Bosque del Cabo had packed for us, and drank our much needed, cold drinks. Then we jetted back while the boat driver blared his favorite American tunes over the speakers (or what he thought us American tourists would like). All I remember was a song by the Beach Boys. I could've done without the tunes, but it was fun. The driver was digging it.