Sunset Kayaking on the Golfo Dulce

All we had booked for today was sunset kayaking. We left Bosque del Cabo at 1:30pm. Eric drove us to Puerto Jiménez, to Escondido Trex. However, we could have arrived an hour late because that's how long we waited for the other couple - who were staying at a different lodge - to arrive. Actually I think they arrived even later than this because our guide walked us to the water and got us situated in our kayaks before they even showed up. Then when they finally showed up, they were so darn rude. A meager hello, no apology, no smiles. Nothing through the whole damn tour. (I dislike snobs.) 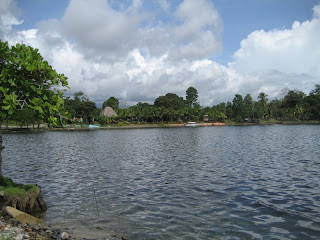 The water was nice and still - I very much needed it to be, as I'm not at home in the water. This was actually quite a feat for me to agree to doing this. At dinner the previous evening we had met a psychologist and his wife, very nice, interesting, active, and well-traveled couple from California. We discussed what we had done here at BDC and what we had planned and the kayaking came up, as well as my fear of water. (I once had a bad experience with a kayak. So he was quite interested in following up how it went.)

I guess there's not a lot to it, but we didn't get any instruction in kayaking from the guide. My husband and I just rowed around while waiting for the other couple. I made it a point to tell our guide that I get nervous when the water gets rough. (Rough to me is any movement.) He said he was glad I told him this and that he will not take us through rough parts, something like that.

The unfortunate thing is that, though I had my point-and-shoot around my neck, I didn't take any pictures while we were in the kayaks. I was probably worried about losing my oars or worried about something. (I should have let my husband take pictures.)

The other unfortunate thing is that I am a wimp. Right when we started kayaking out into the gulf, my upper body started hurting. Also, I didn't like the way I had to sit - it was bad posture. Then my shoulders and side started hurting. I was moving, but moving slowly. Sometimes I had trouble getting the kayak to move in the direction I wanted. My husband also had this problem. But, don't get me wrong; it was a lot of fun, and I was enjoying it.

We rowed out towards the mangroves and then into them. We didn't stop really, but I think that's because the other couple was horrendously late, and the whole idea was to go where we needed to and be back to this certain spot to view a panoramic sunset. As we're kayaking through the quiet, calm water of the mangroves, I hear waves crashing on a shore, but all I see around me is an embankment of trees. It is quite surreal. We row towards this hill where we pull up to the riverbank and get out of our kayaks. We make our way up the hill to lay our eyes, indeed, upon a beach with waves crashing on the shore. It was a very neat experience. 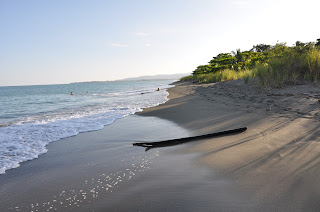 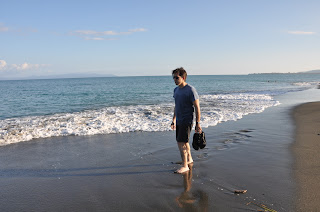 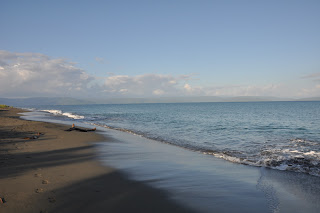 It was extremely buggy here. We took in the view and went in the water while our guide headed off somewhere with a big knife... 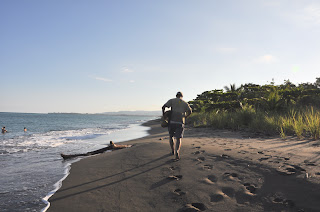 I thought he might be going to relieve himself, but he came back with two coconuts and a pineapple that he had cut down. Then he prepared it for us to eat and drink! 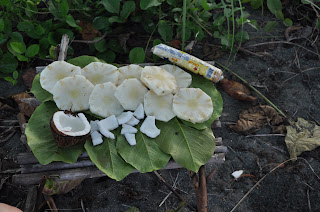 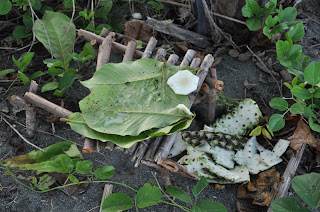 We drank coconut water from the coconut itself! 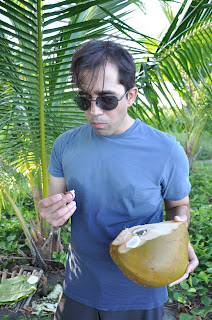 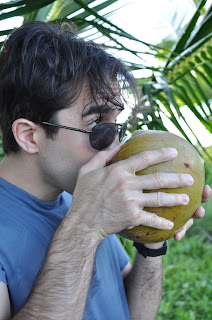 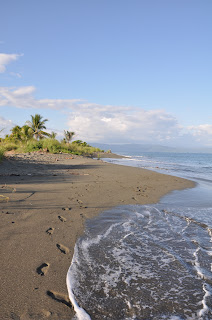 Next we loaded everything back into the kayaks and made our way back to take in the sunset.


* * *
In retrospect, my husband and I took way too much stuff - both cameras, a change of clothing because we read that we might want to change for dinner, sunscreen and I can't remember what else. The guide stuffed all of this in a large, supposedly waterproof bag - it didn't have a seal - which was then placed inside of the supposedly waterproof compartment of our kayak. (We each had our own closed-deck kayak.) One thing that we didn't bring but should have was insect repellent, though our guide let us use his. The sun was harsh, so I would recommend wearing a hat and plenty of waterproof sunscreen. I would pare down what I took and not take my d-slr camera, only my small point-and-shoot (or better yet a disposable waterproof camera) because I was worried about my cameras getting wet, especially my d-slr. So yes, even though there weren't any problems at all, next time I would just assume only take items that I didn't care if they became submerged in water.

One thing I want to point out about this tour is that we never really knew what was next. (Though I suppose that made it more adventurous?) After the kayaking, we thought we were having dinner in town, but the guide never gave us that option. After the kayaking, when we asked him what we do next, he pointed us to our "taxi" (a couple with a car) that drove us back to the lodge. (We paid the fare though BDC, not to the taxi driver.) We thought we'd be getting picked up by one of BDC's drivers, but I guess because they don't know when the tour will end, they don't do this. Not a big deal though. And I suppose if we really wanted to have dinner in Puerto Jiménez, we could have just told our guide, and he would have pointed out restaurants. Regardless, I would most definitely recommend this and most definitely do it again!